I love working on Logistics albums as I so often get the opportunity to go the extra mile with my artwork – starting from his debut in 2006 where I soldered together 750 lights into the album cover to 2009’s Crash, Bang, Wallop, which I hand-painted a canvas for, Fear Not has become a multimedia art project involving sleeves, stickers, animations, videos, hand-painted T-shirts and even Rubik’s Cubes.

The album was developed from the lead single We Are One, a Peter Blake influenced job, which came together so quickly that I barely remember doing it! Because the single was turned around so rapidly, when it came to the album both Hospital, Logistics and I were all a bit unsure of sailing so close to the single in its design, but the project ended up really coming into its own. As well as being a lot more visually developed, it’s in a totally amped up vivid colour palette, which really gives it a punch beyond the single! 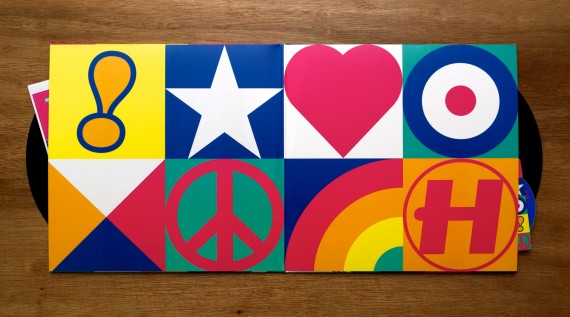 As is becoming the norm for our flagship artist albums on Hospital, the vinyl version is the premium edition. Fear Not is a four-piece album in a luxury gatefold sleeve, and has a copy of the CD included too, to show the love to our vinyl buyers who would be otherwise missing tracks off the album. We didn’t stop with the gatefold though – we decided to bring some user interaction into the mix too. We left the title of the album off of the cover (which is curious as we left his name off his last album’s cover!), instead supplying the letters as stickers for you to add yourself! When I picked up my copy of the album at the Hospital office this week, I made this little video of me stickering one up:

Since I sent the artwork to print, I’ve been eagerly anticipating the first person to spell ‘one fart’ out on their album cover instead. In fact, I caught our head of publishing and Med School manager Ash trying to photoshop it last week, but he clearly wasn’t brave enough to do it to his own copy of the LP!

As usual, we needed some press photos for magazines and suchlike to use when promoting the album. We brought in high school friend of mine Jason Turner to take the photos after he had been snapping some nice portraits of our artists outside our Hospitality events.

Instead of doing anything too ambitious for this press shoot, I had the idea of painting up a couple of T-shirts to match the album art. We kept it simple and ended up with some really great shots! 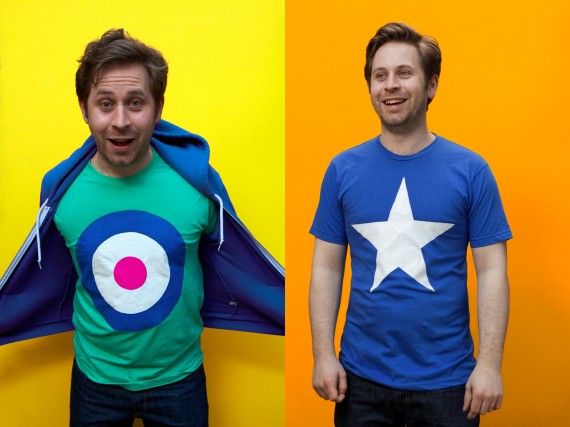 The tiled format of the cover art ended up lending itself well to all kinds of things. Next was this little slidey-puzzle style animation I made for the album preview clips that have been going up on the Hospital YouTube channel:

We were considering getting some sliding puzzles like the video was inspired by made up as a nice little promotional object, but a better idea emerged: the Rubik’s Cube!

These have proved to be really popular – we sent some out to friends and family and bundled them with the vinyl preorder on the Hospital shop. It was a super-limited run of 250 and there aren’t many left, so you need to get on it quick if you want one!

Being the dork that I am though, they inspired me to relearn how to solve the Rubik’s cube. I’m not bad at it now, and am able to solve it in only a couple of minutes, though I don’t feel inclined to enter in any speed-cubing competitions! To prove I really can do it, I made this little video:

It was surprisingly difficult to keep the cube in the shot with such a tight framing, but I never drift out, so you can see it’s real 🙂 It is sped up 4x though, as I’m not sure anybody would really have the patience to spend four minutes of their lives watching someone on the internet solve a novelty Rubik’s Cube!

I do have a pro tip for solving it though – if you’re using the layers method, start with the rainbow as the top layer! 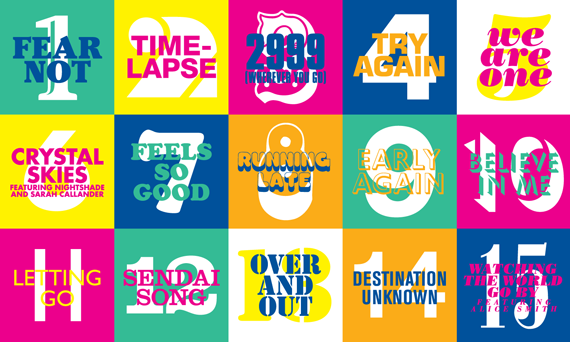 So that’s Fear Not! I’ve had lots of fun with this project, and it’s a great album too! My choice cut is ‘Early Again’, an oldschool jungle number as featured in the embedded video of my slidey animation 🙂

You can get it now from the Hospital Shop, or if you’re quick, you might be able to get one of the Rubik’s Cube Bundles!