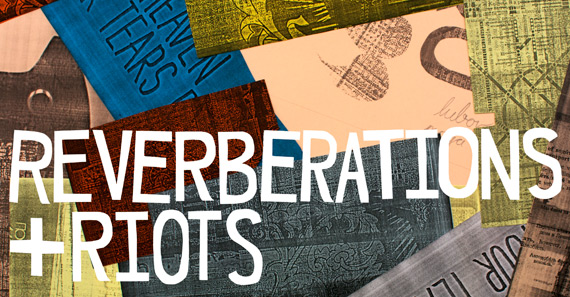 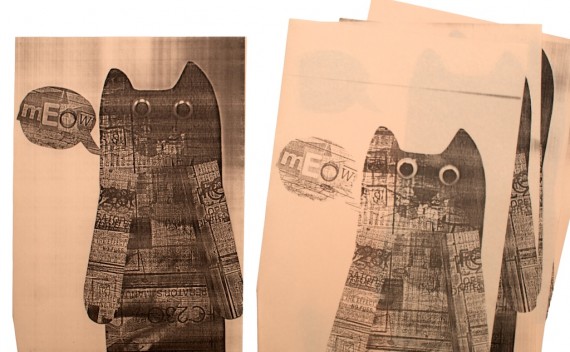 Back in August 2010, my Grandpa was doing some office upgrading and asked if I wanted his old, slightly temperamental photocopier. Despite having nowhere to keep it and no honest use for it, I jumped at the opportunity, and a day later I had a little daily creativity I called Copycat out of the machine.

The copycat had a nice lo-fi charm to it, reminiscent of unspecific Soviet animations of the 1960s, so it was suggested that I extend the idea to the Unquote single. I didn’t want to make cover art out of photocopied photocopier instructions and hearing-aid flyers though, so I went back to my Grandpa, who has Russian friends, to see if he had any cyrillic literature I could use to make this artwork. He supplied me with loads of good stuff like a teach-yourself-Russian book from the 70s, so I got to work. A bit of wrangling with the copier and a lot of cutting and pasting later, the single was done. 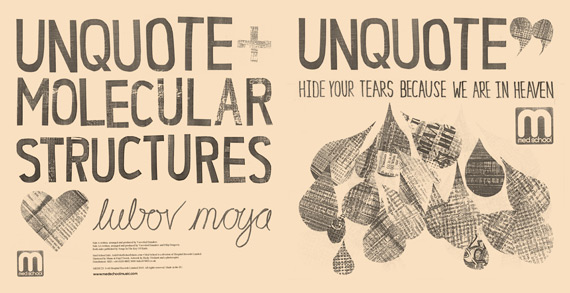 Unquote’s album was finished this summer, and an autumn release was planned. Over at Hospital, however, another album had just been scheduled for autumn too, the ginormous Cross The Line by Camo & Krooked. Being the bigger of the two, Camo & Krooked’s album was given priority, so everybody got to work. After much meditation between artist and label, the album was finally titled ‘Run Riot’, following an earlier track by C&K called ‘Prelude To A Riot’.

I got going on the project once a title was decided, working through all kinds of ideas from spray-painted riot helmets to custom barrier tape, but nothing was sticking. Finally we brought in an illustrator, Toby Whitebread, and with him beavering away in fine style, Lilly and enjoyed a much needed weekend away visiting family in France when disaster struck.

Riots broke out in London and spread across the country, rapidly making Camo & Krooked’s much-deliberated album title look like a bad idea. With everybody at Hospital steadfastly against the rioters, the decision was made to enforce a last-minute title change to ‘Cross The Line’ barely days before the manufacturing deadline, and my work on the project started all over again.

After much panic, confusion and more ideas written off, we found ourselves back at Toby’s illustrations, and it was left to me to make it look less like we were endorsing rioting. After this ridiculous situation and other delays were resolved, Cross The Line was finally finished, leaving me next to no time to magic Unquote’s album artwork out of thin air.

Between everybody at The Purple Gates and myself, it had long been decided that we liked the direction I had taken with his lead single, so with such little time on my hands, I found myself leaning heavily on it. I got the photocopier back out along with some coloured paper, and set about making a better, bolder version of the single cover. 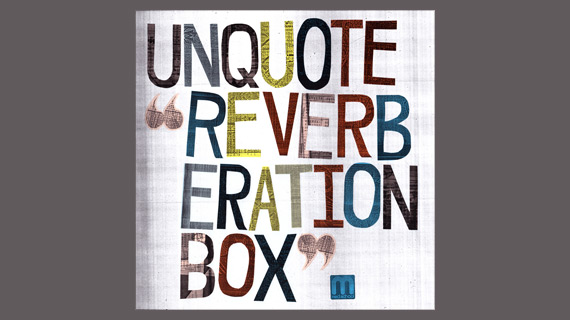 Opinion was divided at the label, and even Unquote himself was being amazingly pragmatic about it, willing to go with it if it was necessary but hoping for more. Eventually it came down to CEO Tony Colman (aka London Elektricity), who quite rightly in hindsight felt that despite the deadline looming, the cover wasn’t good enough for the album. Frustrated that the calamity of the Camo & Krooked project had distracted me from Reverberation Box, I began to panic about how I was going to turn this artwork around with nothing on the table.

I didn’t really want to let go of the text, as even if it didn’t stand up by itself, it followed on perfectly from the single. I began thinking again about the album’s title and began trying to work out if I could make the words look like they were reverberating, which led me to the box. 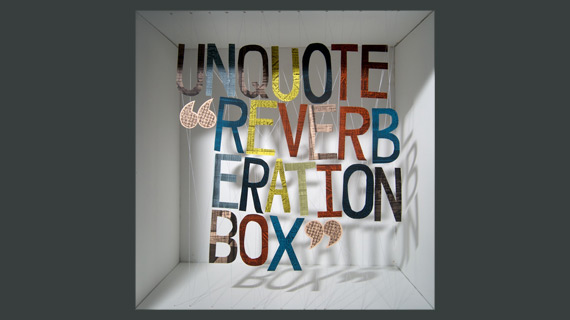 I grabbed some wood and some paint and whipped up a box to suspend the text inside. A few sample photos were circulated, and much to my relief everybody’s response was positive!

It wasn’t good enough for me though, so I dismantled the box and started all over again, painting and sanding everything and filling in all of the gaps to yield a clean, professional result. I reshot it, rejigged the lighting and photographed again, and finally the album cover was finished! 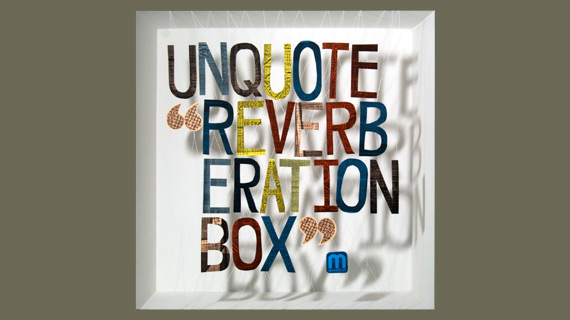 The cover’s completion was a massive relief, but it was far from the end of the project. Thankfully the box gave me some more nice visual cues to work with, and I made a nice quilt-like pattern out of the photocopied paper scraps from the title text, but something still needed to be done about all of the copy. 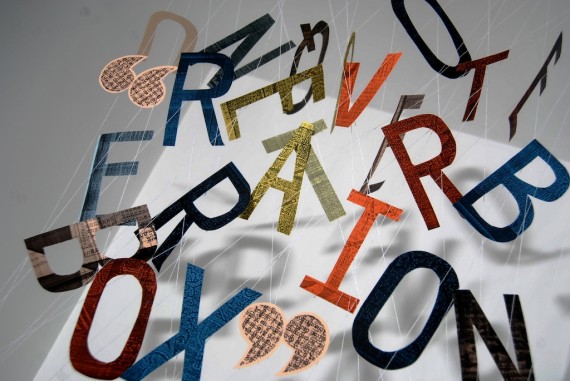 By some completely unrelated occurrence, my other half Lilly had just realised her dream of owning a typewriter (for reasons I am still yet to fathom!), in the form of a Scheidegger Princess-matic: 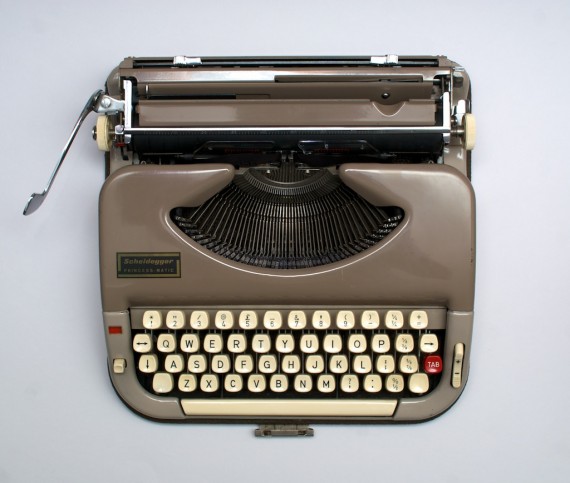 This retro clacker suddenly clicked with me and I realised I could exploit its low fidelity to match the rest of the artwork, so to tie up the project I typed up all of the label copy for all formats, and got the scissors back out to put it all together. 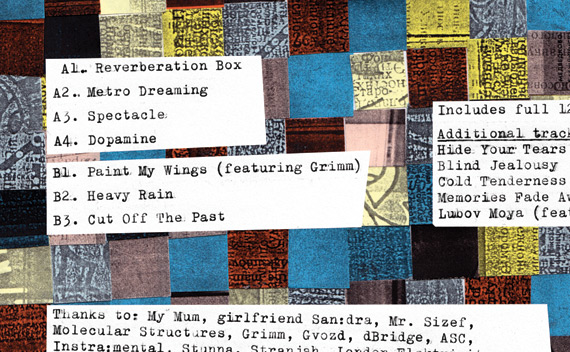 Finally, the artwork for all formats was tied together, but one last thing had to be done: the website. 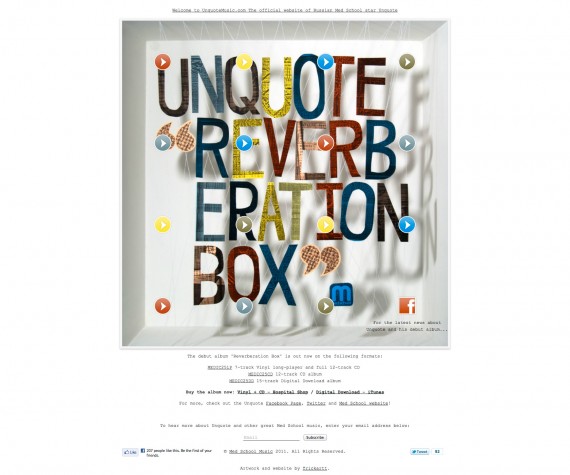 With time and resources still tight, I put together this little one-page wonder. It’s essentially copying the idea from the Nu:Tone website I made earlier this year, but uses the Soundcloud player instead. Unfortunately it’s flash-only as that’s all the Soundcloud player had for me, so it means no love for iOS users. This didn’t stop it from getting mostly positive attention, including Soundcloud even blogging about it themselves! It’s a shame they seem to be attributing the site to Unquote rather than me, or even the label, but hey, all publicity is good publicity! 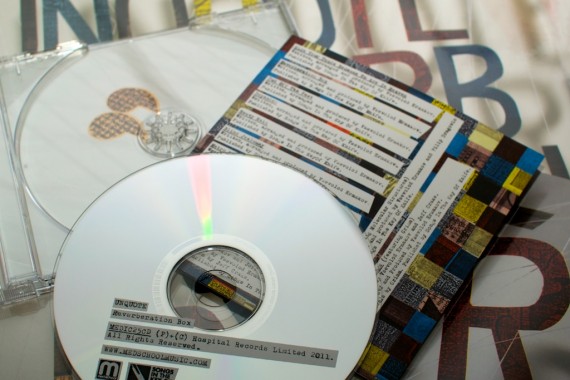 With that, the project was all wrapped up. I picked up my finished copies from The Purple Gates this week, and the hard work has paid off. It’s one of my favourite creations in a long time, and I hope everybody else thinks so too!