Although it’s the obvious kind of content for me to be writing about, I’m trying to avoid making my blog into nothing but a series of case-studies into the latest album I have artworked. Having said that, here I am talking about my latest work to hit the music industry- London Elektricity’s ‘Yikes!’. It’s a good’un!

This is the second Hospital album cover in a row to be spawned from my Something Creative Every Day project. The other is Nu:Tone’s Words and Pictures, but they both came to be in different ways. Words and Pictures came from my own initiative, but Yikes was driven by the artist himself – Tony Colman, better known as London Elektricity.

I was very flattered to learn that Tony has become a fan of SCED – he even put a little note about it on his blog. It kind of took me by surprise as while I work very closely with everybody at Hospital, I always saw my personal projects as, well, personal to the extent that I imagined nobody I worked with particularly followed them. 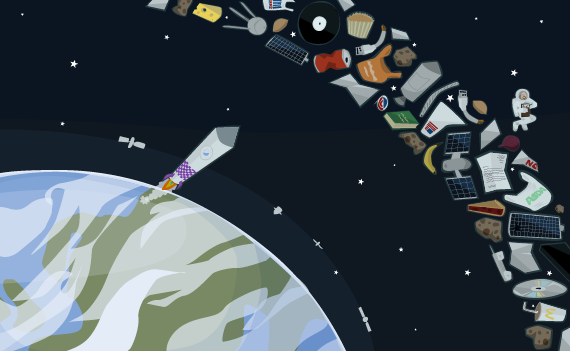 Since the album was put on the release schedule, we had been through a couple of my daily creativities as potential album covers. The above drawing of Junk Orbit was one of those possibilities, as at one time the album’s working title was ‘Round the World in a Day’ and the spacejunk appealed to the sci-fi fan in Tony. It was also considered for the cover of Logistics’ Spacejams, but we held it back as Tony wanted it for his own. 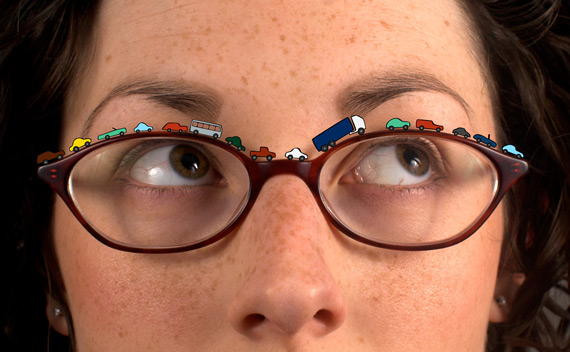 Time moved on, more daily creativities fell out of my brain the album’s title changed to what it is now. Along this journey, the Eyeway (above) became the preference for the artwork, so I packed up my ghetto lighting setup, made my way to Forest Hill and shot some photos of the CEO (as putting a photo of my other half on the cover wouldn’t have made much sense!). After a bit of indecision over what to go along the glasses, it was decided as he liked the original with the cars, I’d do another line of traffic, which each vehicle representing a track on the album. I was given a working tracklisting and got to work with my own interpretations of the track names in vehicle form.

1. Elektricity Will Keep Me Warm
Possibly one of the more straightforward – a van from the electricity board. This was potentially subconsciously inspired by hearing the name London Elektricity was inspired by the name of the meter man that turned up at Tony’s house back in the 90s.

2. Meteorites
Some kind of meteorite-hunting vehicle, designed to watch for falling meteorites and go and catch them where they land.

3. Had A Little Fight
Possibly the most obscure that maybe made a bit more sense in an earlier version of the cover* – I was imagining some kind of big argument resulting in one party driving off in their ridiculous sports car and crashing it cos they were so angry. If you look carefully, you’ll notice the bonnet is all crumpled up!

4. The Plan That Cannot Fail
This is my favourite vehicle in the traffic- The Plan That Cannot Fail is a fantastic title and makes me imagine people psyching themselves up for ridiculous ideas that they know deep down won’t work but are trying to convince themselves that they will. Like making a car go faster by strapping a ginormous rocket to the roof.

5. Yikes!
This is based on the yikes machine, which you’ll see a bit more about below.

6. Fault Lines
Made me think of cut-and-shut cars; I figured one made of two completely different cars would have a pretty obvious fault line.

7. U Gotta B Crazy
Like a mad dictator, U Gotta B Crazy is a huge tank heading into the realm of chaos while playing ‘Don’t Stop’ by Fleetwood Mac through its P.A. system.

8. Round the World in a Day
Another more straightforward one – a parcel delivery truck covered in flags of countries from all continents visited.

9. Love The Silence
Cars are so quiet these days that most of the noise they emit comes from the friction of tyres on road. I figured hovering cars wouldn’t make that noise, and would therefore be loved for their silence!

10. Flesh Music
A late addition to the album, but what a title, and what more suitable a move than to make a car out of a giant pork chop!

11. Invisible Worlds
Something not visible but taking up space anyway.

After a somewhat drawn-out process coming to a compromise over the layout between the directors, we had our album cover, so next on my creative agenda was press photos. No Hospital press shoot would be complete without the picture-taking skills of Andrew Attah, so we got together with Tony and Elsa Esmeralda, the lead vocalist, at a studio in Camberwell and got snapping. Not only did we get so many great photos that we ended up doing the biggest CD booklet Hospital have ever done for an artist album, but we had a whole tonne of fun at the shoot too, as you can see in the behind-the-scenes video I took below:

I was asked to make a prop for the shoot, which was a challenge I couldn’t resist. With a load of tat from eBay (as usual) some cardboard and a bit of imagination, I created the Yikes Machine, which was loosely based on the Milgram experiment and a load of other sci-fi clichés that happened to be passing through my mind. The machine even had a little air pump and lights to power the gas chambers, but somewhere between Trickartt Towers, a Vespa trip traversing the city and the shoot’s location, they lost their watertightness and we had to replace them with emergency sprite bottles instead! 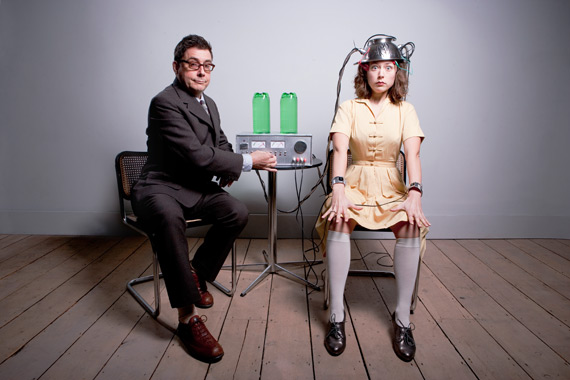 After all that, with a bit of work, the album was complete. I used P22 Underground Pro for the layouts- a revival of ITC Johnston, the typeface used by London Transport, as a nice little nod to the city of Tony’s namesake. One of my favourite little things about this typeface is that it includes a sound recording copyright symbol in its glyph tables, something that causes me immense amounts of pleasure, having been working in the music industry for so long! 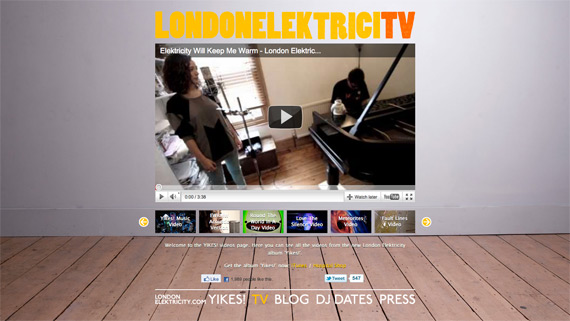 With it all signed off and the aforementioned website done, it was full steam ahead with promotion work leading up to the album’s launch at the sold-out Hospitality at the Brixton Academy in April. I animated the cover, as at the top of the post, for the TV loop playing around the venue (which I was surprised I hadn’t thought of doing until the day before the album was launched!) and we even had huge posters of the album artwork made, which somehow didn’t look quite so massive when they made it to the venue: 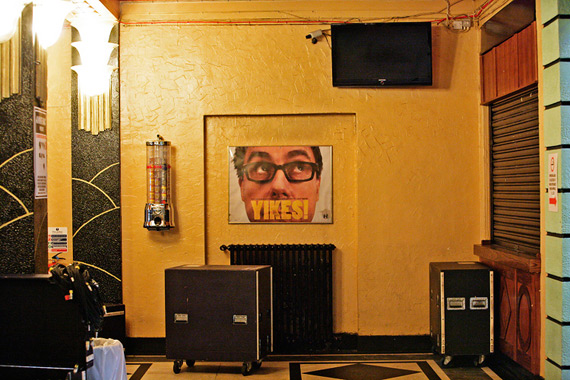 We even considered getting promotional cardboard glasses made to give away at the album launch. I made some prototypes and decided even with a really heavy paper stock, they were too flimsy, but the prototypes came in handy at Tony’s birthday party anyway! 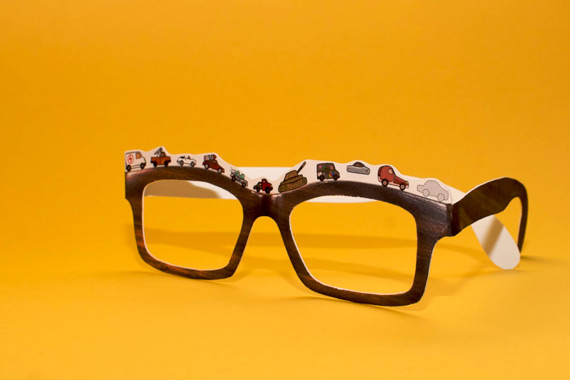 That about covers it all, so all that is left to do is for you to listen to the album! Yikes!, London Elektricity’s fifth studio album, is out now at The Hospital Shop on CD including the aforementioned booklet; Limited edition 4-piece vinyl gatefold LP, which is shrinkwrapped with a copy of the full album on CD included; and digital download, which is also available on iTunes (and other good music outlets). 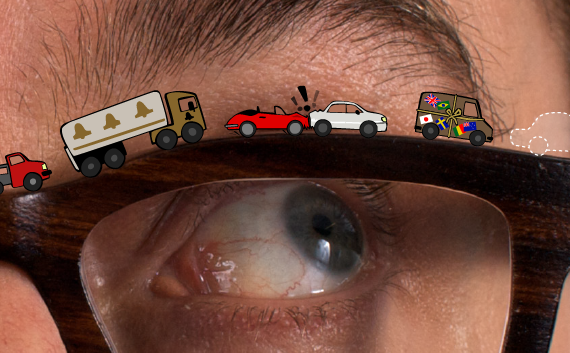 * The draft tracklisting I was given put ‘Had A Little Fight’ next to ‘Yikes!’, so I thought the pair riffed off each other quite well, like the angry post-fight driver crashed into the other car, which made them exclaim Yikes! ^