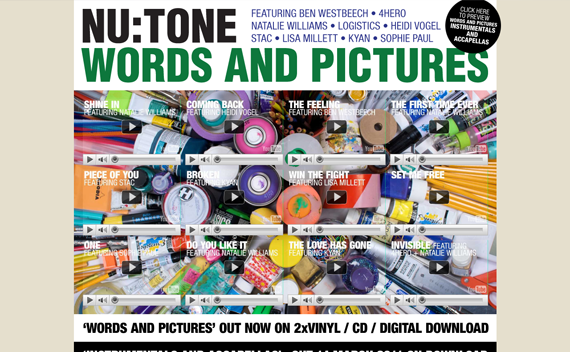 When the Instrumentals and Accapellas version of the album came out too, I redeveloped the site to seamlessly switch to the alternative version of the artwork, this time made of embedded YouTube players of the instrumental versions of the tracks.

The site proved to be a massive success, thanks to its design no less, and even went as far as being written about in The Guardian– I am told it was in the actual printed copy too, but I was privy to it online:

Another act making great use of YouTube is Cambridge drum’n’bass artist Nu:Tone. Ahead of the February release of his new album, Words & Pictures, his label, Hospital records, wanted people to be able to hear the record, but also to get the artwork into their heads. To that end, they’ve managed to create a version of the cover art at nutone.org that has YouTube embeds of all 12 tracks seamlessly integrated into it (ie each video features one detail of the artwork). It’s a simple but extremely effective trick, which has spread interest in the album around the social sites in a way that a standard player wouldn’t have. Turns out the record is rather good, too, particularly the four tracks featuring R&B singer Natalie Williams.

I think that’s the first time my work has ever been referenced in the national press, but hopefully not the last! 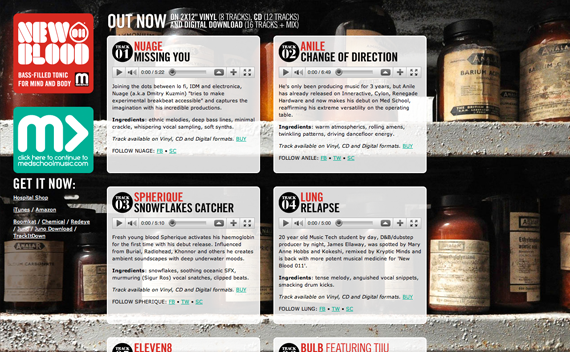 Hot on the heels of NuTone.org came the New Blood 011 minisite. Hospital were keen to recreate the success of the Nu:Tone website, and though I appreciated the advantages of what we did with it, I didn’t want to recreate exactly the same thing. Ash (Med School’s label manager) wanted to drip-feed the tracks from the album over the space of several weeks running up to its release, so I wrote a system in PHP that automatically published the tracks on the dates specified by the label.

I used YouTube players again, but didn’t use the video as we had some nice text wrote for each track, which was a much better use of the space. The other nice thing about the design is that it scales nicely depending on the size of your screen, from XGA all the way to 1080p:

The New Blood 011 site has caused the monthly traffic to rise to twice its monthly average since it launched, which sounds like success to me!! 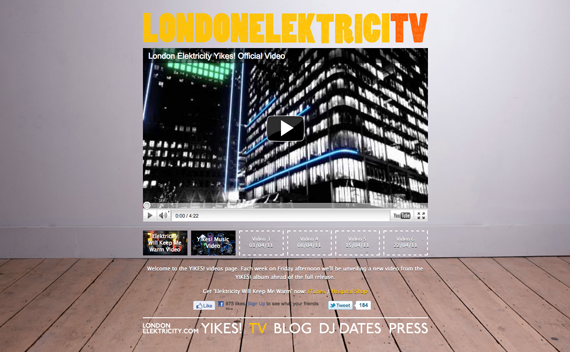 The latest minisite I have completed for Hospital is the London ElektriciTV website. The label commissioned a series of animated music videos to go with tracks from London Elektricity’s brand-new album ‘Yikes!’, and we needed a website to put them on. The site is pretty simple stuff, but I managed to use what little jQuery I’ve picked up so far to make the video players switch seamlessly without having to reload the page.

The site is a part of a bigger London Elektricity website, including details about the album and a personal blog, but the videos minisite is the page I am most pleased with. It has only been live for two weeks, but has already gathered the better part of 1000 likes on Facebook and 200 tweets! Awesome!