Skip to content
all these entries! yesterday, i made this:

Click it. it’s a bit nauseating, but really somewhat fascinating!

Kali pointed out to me the amazingness of boobies! check their feet! 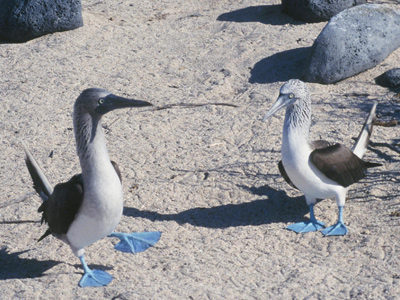 this almost proves that not only are they graced with amazing names, but they are amazing creatures full stop! possibly the greatest airbourne creatures at least! 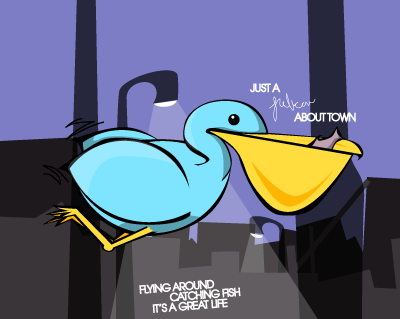 I decided i was going to draw a pelican, with all it’s pouchy glory. so here it is, pelican about town. when setting out to draw it, however, i got distracted and ended up drawing this first: 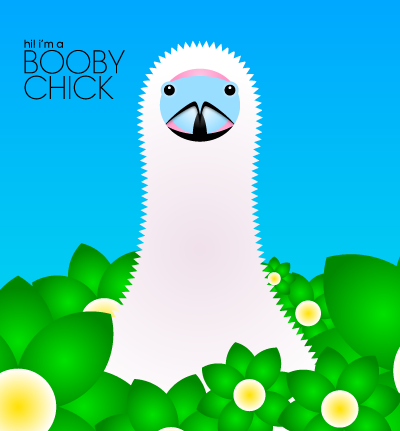 this isn’t me being crude, that’s you! look! Wikipedia doesn’t lie! hehee! anyway. i thought that blue tits were funny, but i think “booby chick”s really take the biscuit.

Here’s some stuff i neglected to update last week.

I Added 4 new wallpapers for you to download! although some of them really aren’t that new at all. but the crazy oddlips comic look was just done this evening! so fresh i’ll prolly hate it in the morning. haha. 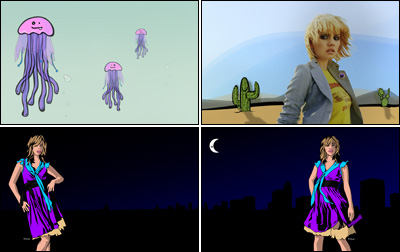 I made a Shortfolio and a Threads Portfolio this week. The idea is to be a shorter and more powerful portfolio, and something to show people that may be interested in working with me or in the fashion industry. or something. 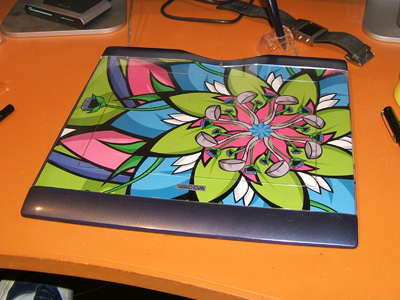 This was something i forgot to add in my last post… I decorated my Wacom pen tablet, made it all outlandish, floral and ladle-y. hooray!

Yes, it’s been shamefully long since i last updated this. i have tonnes of new stuff to show, to the point i’ve probably completely forgotten about some stuff! hah. 🙂 so let’s get on with it!

This is John B’s 5th Artist Album. it may as well be 80s pop at 174bpm, which if you ask me is fantastic! great fun! hooray john! etc! 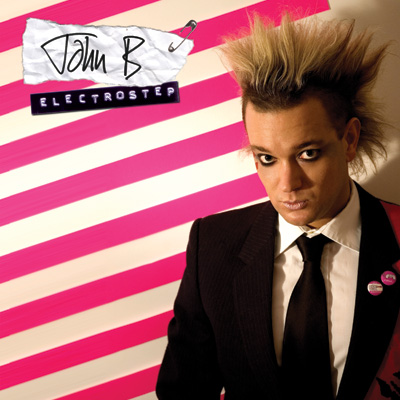 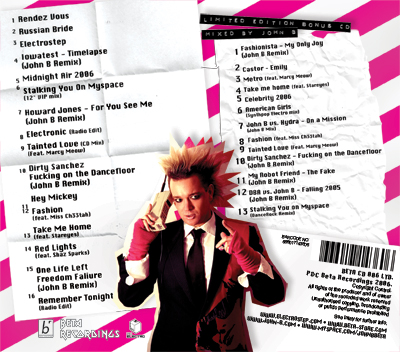 Med School is a new sub-label of the mighty Hospital Records. i spent ages dancing around ideas being so close to what I considered perfection but not quite, then I had some of what I called ‘colsperation’. Talking to Tony and seeing how enthusiastic he was about the project just fuelled me, and now it’s done and i’ve smashed it!

The project has consisted of logo and identity design, sleeve and labels, publicity, (minor) web design, and typography. I completely designed and created the two weights of the Med School font from scratch due to a dissatisfaction with the rounded typefaces available. again, very happy! 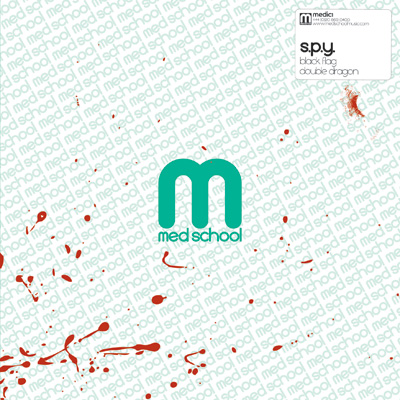 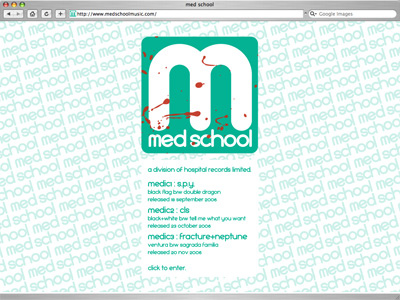 Speaking of webdesign, i actually did some for someone else. here is a little preview of the website I have built for Kasra’s Critical Music imprint. It hasn’t gone live yet tho, so this is only a little sneak at it…

And I’m not stopping there! believe it or not, I’m doing more web design. A complete overhaul of Hospital Records’ website is in the pipelines too!

Logistics – Now More Than Ever

Here’s another big project I’ve been working on! This is Logistics’ debut album ‘Now More Than Ever’, which is probably the most anticipated and (hopefully going to be the) biggest drum & bass album of the year!

The project was really quite something! It started by Chris showing me his idea, then I got carried away with working on it! I came up with this wild outlandish idea to do the typography in lights, and ended up making it! Amongst usual design work – I singlehandedly commanded the leadup single “Beatbox Master”, and did the typographic work on the album, but the real feat of the project here is the 750-LED sign. I designed and engineered the sign from scratch, and soldered all 750 bulbs together (several times over in some places) and then wired it together. Many thanks to my grandpa for his sterling engineering advice througout the course of the project! 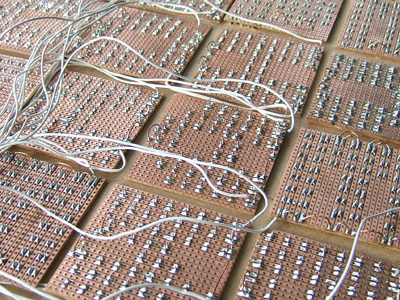 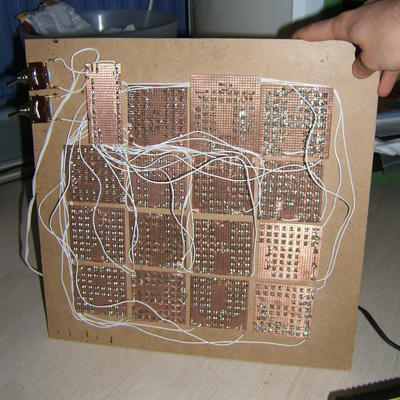 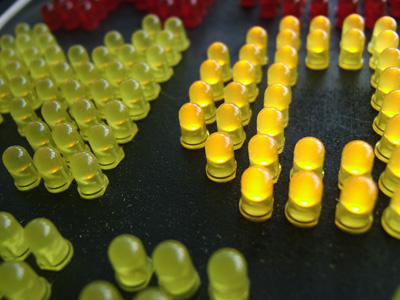 We then brought Boris Austin (BoxedLab.com) to photograph the man himself Logistics and the sign. There were a few minor hiccups with the photos, but we got there in the end and I think Boris has done an absolutely magnificent job of the photos! 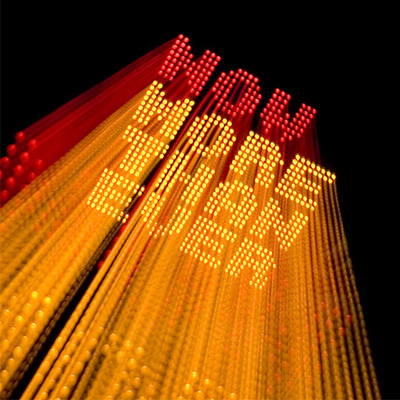 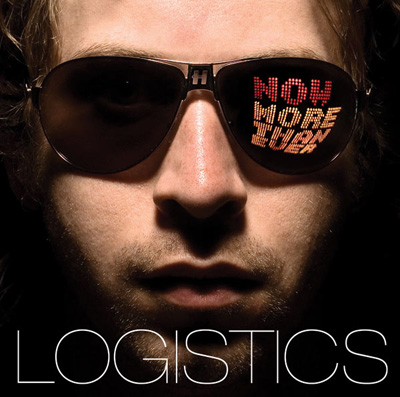 Above: Album Cover. Also big ups to my brother Adam for loaning us the shades we used on the album cover. safety! Below: Leadup Single Cover 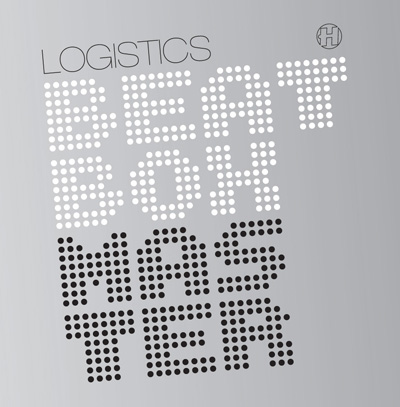 The leadup single is in Black and Silver (all spacey looking). It is being released on 12″ Single and 7″ in an inverted colourway, with an alternative B-Side. Buy Both! hehee. Oh and of course, the album is fantastic. 2 CDs of Magnificence! well done Loggy!

After the seminal Floodlight by DJ Fresh launching the DOA label astronomically, there has been a rather long hiatus. but they’ve finally lined up the next single, and i was brought in to do the art.

It’s not very Trickartt! the music is very dark and techy, so i went for that look! hopefully it’ll look good in print and the people that like that sort of music will like my art! hehe.

Just to tease you! here are my latest hand-painted designs. i promise i’ll start selling some if you can prove to me you’ll buy them! hehe. 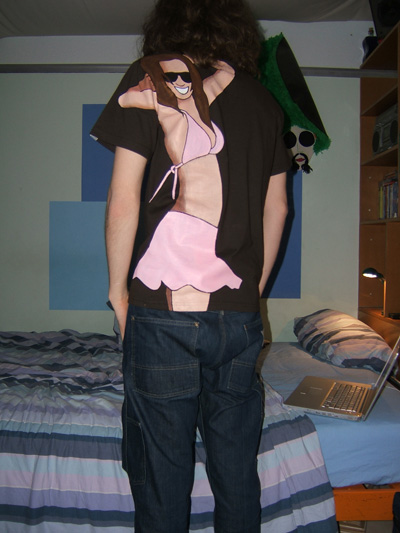 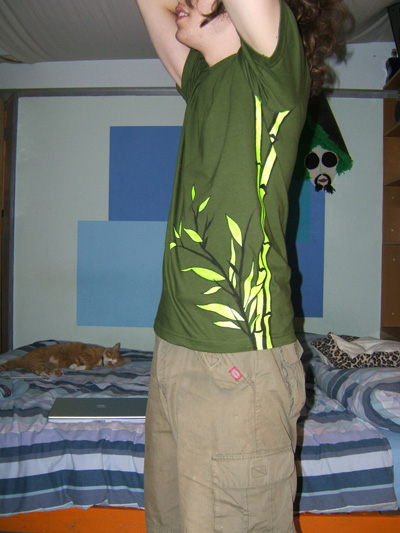 now this design i am happier with. it’s maybe a little femenine, but i think it would look fantastic professionally printed! it’s my first not-completely-stupid design, and one of my first with minimal colours. i went for the lime green to match the laces in my new EMILIO PUCCI ADIDAS! hehee. i was so glad i got them!

We got some pinbadges made of the pixelly quiff i designed, to promote the computer love ep and renaissance man lp (both of which are out in the shops now, and i reccommend if you like your drum and bass bouncy and stupid!) 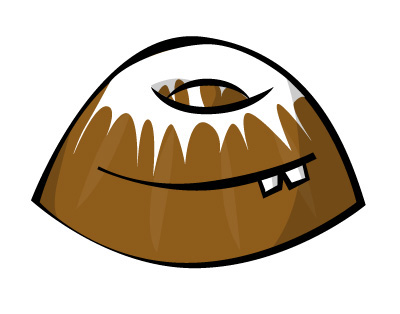 to further my range of carpentry products, I designed and built Adam a new bed for his birthday! i spent ages beavering away on it hidden in my grandparents’ garage working on it where he would never see it, but he still rumbled me, the swine. oh well, at least the end product is good! here it is modelled by his daughter, looking rather cheeky! 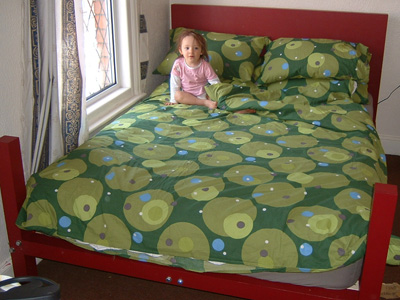 also on the carpentry tip, i finally finished and painted my record&bookshelves to match the decsk! very pleased with them both now! hooray! 🙂 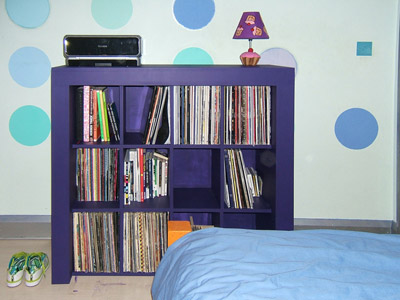 lastly, as you may have spotted in the above pic, i made a lamp! it matches the skirt I made for Lilly earlier in the year, and i’m really pleased with it! i think it ends the cupcake range from trickartt from the time being. i don’t want to potentially upset johnny cupcakes. haha. the workings are salvaged from a broken ikea lamp i managed to fix, the base is sculpted out of fimo, and the shade is hand-painted! 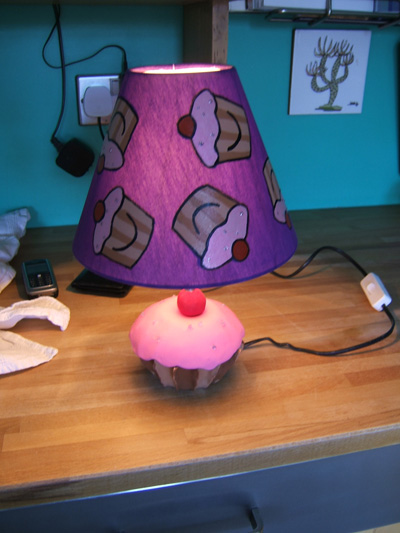 ok that’s enough from me. hopefully the next time i update this it will be sooner than 3 months away!