Skip to content
More recent:
Older:
« That’s right, it’s time for the loosely triennial website redesign!
FOOD; cooking and eating in and out of Austin » 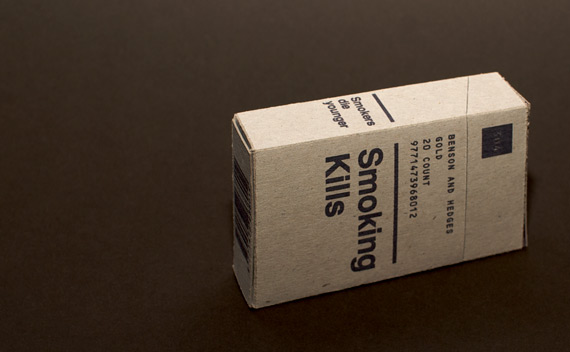 I happened upon the Graphic Design outfit Build‘s blog this morning, where I discovered their post from earlier this month about de-branding cigarette packages. If you’re gonna read my post, it might be worth giving theirs a look first.

This is a government proposal I actually agree with, so I was a little disappointed to see the point in the proposal was a bit overlooked. I was going to suggest Build missed the point, but perhaps it was Icon magazine who missed it, as they set the brief; ‘could [cigarettes] still look good while warning smokers?’.

‘Looking good’ is obviously very subjective, but surely being attractive is what they’re trying to stop with these de-branding proposals. Warning smokers is something that cigarette packaging already does, and would be difficult to make any more effective than it is now*. The exercise in de-branding would be not to make things look bad, but to bring all brands’ packaging onto an equal footing. This would reduce the desirability of the product, which could help reduce the desire to start, and perhaps as a nice side effect, make smokers increasingly feel like they shouldn’t be smoking. 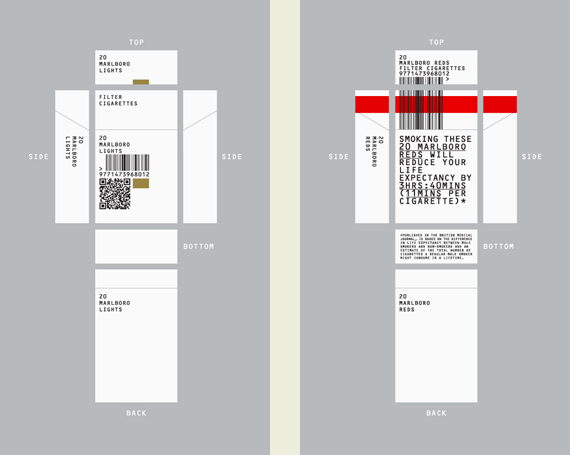 These are two of Build’s cigarette repackaging designs, and are probably the property of Build, not me!

The biggest issue I have with Build’s designs are that they haven’t de-branded cigarettes- they’ve just re-branded them. This makes for very pretty packaging, but still offers identity and an unnecessary sense of luxury, which is what is meant to be eliminated by putting them in plain packages. Cigarette branding and packaging is like a designer label on clothes, and is something cigarette manufacturers and the marketing companies they commission have been striving to achieve since the brands existed. There is evidence of this at TobaccoPapers.com, which is an archive of the communications between the tobacco industry and their creative agencies in the mid-ninties .

Time to get a bit more constructive with my criticism.

The suggestion of adding the colour to the packaging fails at both parts of their reasoning:

I actually quite like Build’s proposal to use OCR-B for the typeface. In a way it’s genius, as it genericises and offers very little personality with very little room for tampering with the design. The problem with it, however, is that it can look too robotic, making things such as the smoking warning look like the information is not there to be read by people. Perhaps the best compromise would be to keep the health warning in a neutral sans-serif, but put the product information in the OCR-B.

Considering all of this, here is my take on de-branding cigarettes. They may not be as pretty as Build’s designs, but their attractiveness is precisely what made the design a unsuccessful in my opinion. 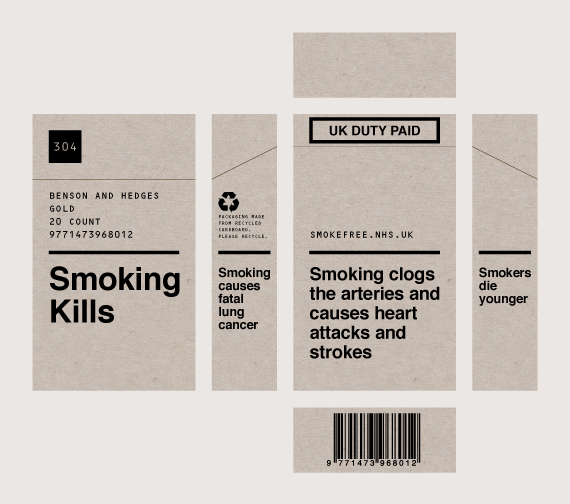 These are meant to be plain, unbranded packages, so there is no reason to have the brand name of the cigarette on more than the front-facing surface. With this design, 50% of the major surfaces are focussed on health warnings.

This design eliminates the power of branding from cigarettes, levelling the playing field and reducing desirability.

Using unbleached recycled cardboard for the packaging serves as a subtle way to encourage responsibility in the packaging (even if you can’t do so with the product!) and not bleaching the card would be one less chemical finding its way into the world from cigarettes. Aside from the ecological benefits, white is a bad choice psychologically/graphically as two of the biggest connotations with the colour white are innocence and cleanliness, neither of which apply to cigarettes or their manufacturers.

My design might not be as attractive as Build’s, but I would like to believe the design is more successful at de-branding packaging without abandoning good design principals.

* I’m sure it could be argued that smokers are becoming desensitised to the messages present on current cigarette packaging, but there’s not really any other consistent way of getting the message across. to people who don’t smoke or don’t spend a lot of time around cigarette packaging, though, the images and messages can seem shocking, and may act as a deterrant. ^