Skip to content
More recent:
Older:
« On the packaging of cigarettes
Something Creative to end up 2010 »

When one goes on holiday, they are prone to being asked what they got up to when they get back. It’s a fair enough question, but I like to go on holiday to relax, so doing nothing doesn’t make for interesting conversation. I realised, though, what we did do while away was a fair amount of cooking and eating- both in and out of home, and even in and out of Austin, and with that came some interesting visual stuff out of me.

Lilly’s friend Mary is an adventurous cook. So adventurous that she is going to work on a goat farm in Maine this year, to make cheese. Awesome. Mary and Lilly used to get together to make geographically-themed feasts with their families, and had always vowed to make croissants, which finally happened this year, with me tagging along too. 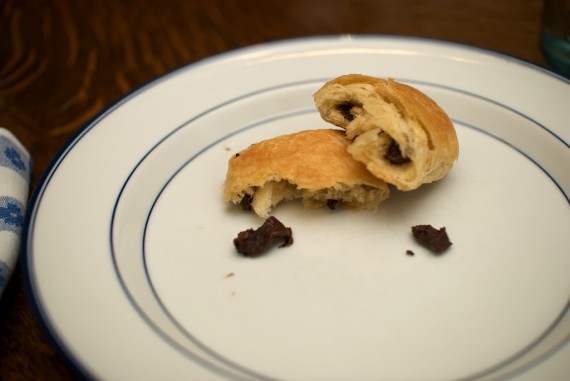 They took about 30 hours to make, with lots of folding and rolling and folding to get the nice flakey pastry that you want in a croissant. I fully documented every step of the process in photos, and here are some highlights of the 82 photos I took of the process.

Even if you, dear reader, aren’t impressed, we all were! Croissants are awesome!

Making pizza isn’t too unsual for us, but Lilly’s Mom bought a pizza shovel to go with her stone, which was a revolution in pizza cooking for me. We are gonna have to get ourselves a shovel if I can find somewhere to keep it in our tiny kitchen!! 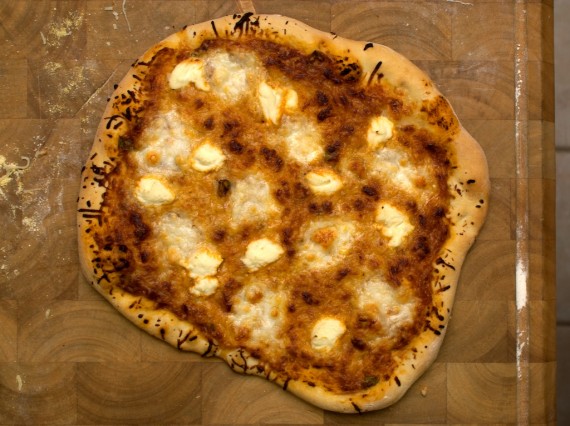 We were given a pasta machine for christmas by Lilly’s parents, which was awesome! We had to bring it back with us even though it brought one of our bags overweight and we don’t have any space to store it, as the results were so good! 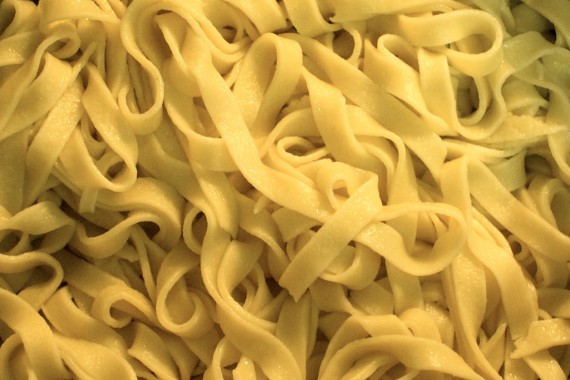 We got two types of pasta out of our dough. First up was the fettucini you should be seeing above, which we served with a bolognese that was much more successful than the last time we tried to make one in the States. 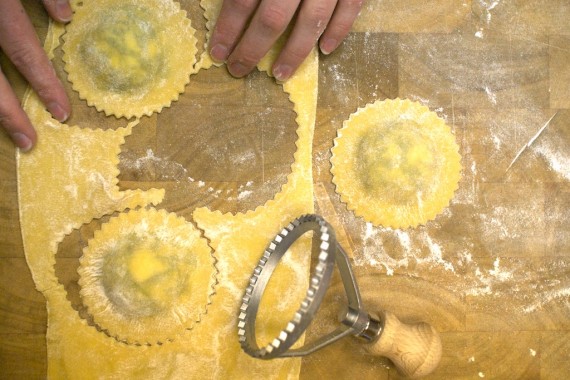 We made spinach and ricotta ravioli with the other half of the dough, which we ate a couple of days later. It turned out way better than we expected it to!

The trip to El Arroyo on our annual ocean-crossing voyage is a must. Every time we go, Lilly gets the Sour Cream Chicken Enchiladas, which is justified as we only end up going once a year (we’d go more if we didn’t live on the other side of the world though!). 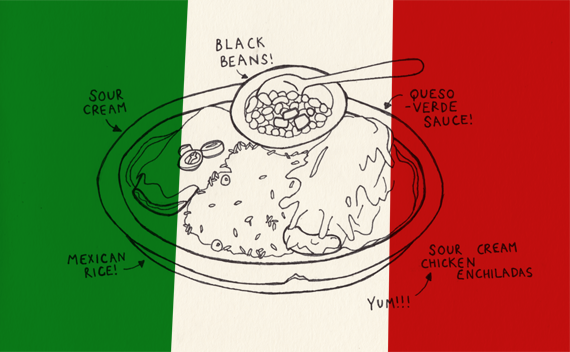 ‘El Arroyo’ is loosely Spanish for ‘The Ditch’, because the original location is built on a big ditch. They have a sign outside that says weird stuff. I would say it’s the best Mexican joint in Austin, but I haven’t been to any other place for mexican foods in Austin to compare it to. That’s because I haven’t had the need to go anywhere else though! Muy delicioso!

Burritos are clearly one of the greatest innovations in North American cuisine, and the greatest place to get them in Austin is Freebirds. We managed to go there twice while on our winter break this year, which I was pleased about as we never really managed the return visit in previous years. It helped that we realised they had a location much closer to home! 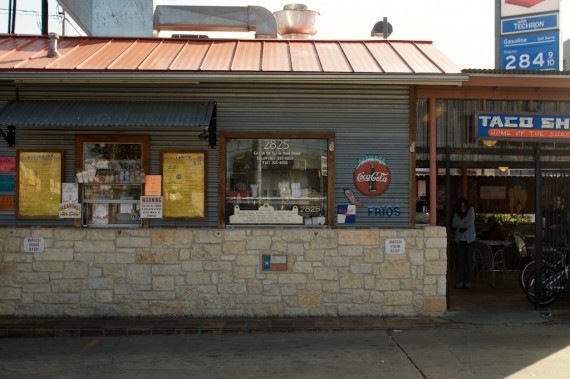 Our burrito-eating wasn’t restricted to Freebirds either- we even managed to squeeze in breakfast burritos one morning. That’s right- burritos for breakfast! We got them from Taco Shack, from the location that I am pleased to note actually is a shack. Awesome!

We got fried chicken one night, and got it from Top Notch, which was pretty great. I’m not usually an eater of fried chickens, but I enjoyed it. I enjoyed the architecture of the building more though, with its vaguely space-age carhop: 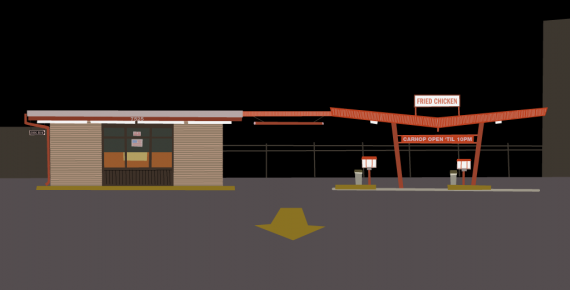 …And what trip to Texas would be complete without some barbecue?! Lilly’s Mom had a restaurant review book of the city, so she used it to find the best BBQ in Austin, settling on Smitty’s Market in the small town of Lockhart on the outskirts of the city. 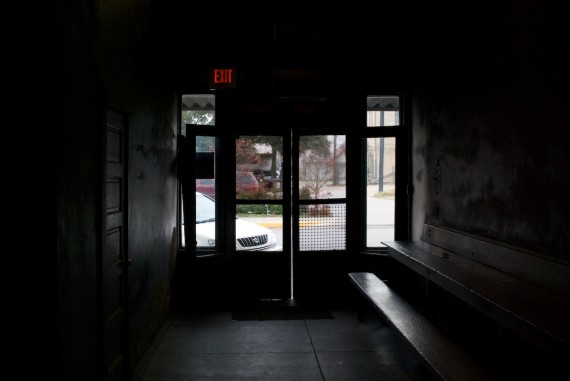 The place was slightly perplexing at first- we walked into this dark corridor, at the end of which was a room that had fires burning on the floors, under the chambers where they were cooking the meat. You ordered your meat there, and were given it on sheets of paper along with some slabs of bread and plastic knives. No forks though. They seemed to have something against forks there. 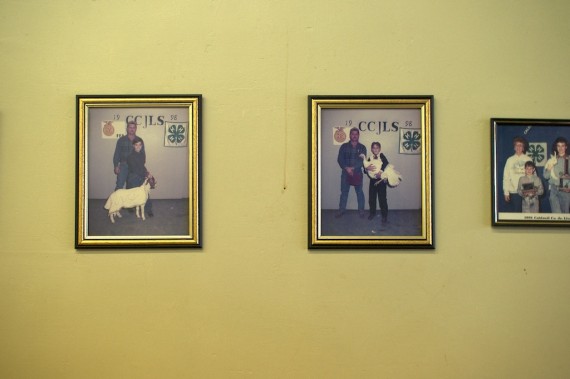 Once you had your meat and no forks, you moved through into a big dining hall, where you could get sides with spoons, but no forks. The hall was lined with photos from Caldwell County Junior Livestock Show, which tickled me. Must’ve been a family pride kind of thing. I particularly liked the goat in the Elvis jacket, as pictured above. Anyway, the dining hall was where you ate your meat. 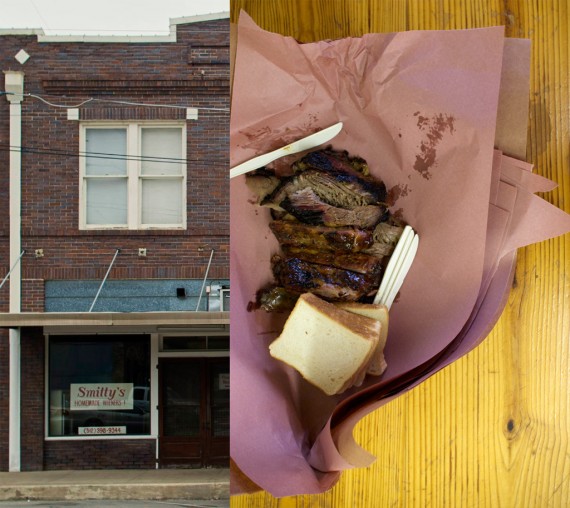 And the meat was good. The feeds combined with the experience of eating off paper without forks made the drive out of town well worth it!